From Provence to Auvers-sur-Oise

The 200 paintings projected in our show are part of prestigious museum collections such as Musée d’Orsay in Paris, London’s National Gallery of Art, Van Gogh Museum in  Amsterdam, Museum of Modern Art, and Metropolitan Museum of Art in New York.

In 1888, Van Gogh decided to relocate to Arles, an idyllic city in the  South of France where his paintings became even more colorful and  expressive. Annabelle Mauger shows how Arles seemed like an artist’s paradise to Van Gogh. Surrounded by breathtaking, sun-drenched sceneries, the artist completed many of his most celebrated  paintings in 1888 and 1889.

Indeed, he painted Bedroom in Arles in 1888, and produced his most well-known floral painting, Irises, in 1889. He subsequently admitted  himself into a mental health facility in the nearby town of Saint-Rémy-de-Provence. While committed, he resumed his artistic practice and produced more than 150 paintings, including the famed Starry Night  showcased in our exhibition. Shortly afterwards, Van Gogh left the  hospital and moved to what would be his last abode in Auvers-sur- Oise, in suburban Paris.

Vincent Van Gogh arrived in Arles on February 20th, 1888, with the intention of starting a “Workshop in the South.” After staying in a hotel, he moved into the so-called “yellow house,” where he rented four rooms. He tirelessly painted things from his daily life, including an old woman from Arles, the lands- cape around him and a butcher’s shop. Starting in July of the same year, he indulged in portraits and self-portraits. He began handling his colors with great freedom, making them more and more vibrant.

“For many days I’ve been absolutely distraught, as in Arles, just as much if not worse, and it’s to be presumed that these crises will recur in the future, it is abominable“.
VINCENT VAN GOGH

He painted portraits of people around him. Still lifes were  also prominent in his work at the time, especially those featuring irises.

“Auvers is really beautiful – among other things many old thatched roofs, which are becoming rare.  I’d hope, then, that in doing a few canvases of that really seriously, there would be a chance of recouping some of the costs of my stay – for really it’s gravely beautiful, it’s the heart of the countryside, distinctive and picturesque“.
VINCENT VAN GOGH

Van Gogh moved to Auvers-sur-Oise, where he was treated by Doctor Gachet, a friend of Cézanne and other Impressionists. Van Gogh painted a portrait of him. This period is marked by a growing melancholy in the painter, which would eventually prevail.

“My dear brother, you know, I feel I am in Japan” wrote Van Gogh  to his brother Théo when he arrived in Provence in 1888. He thus equated the South of France with this exotic country he had never  visited, like a wistful dream, a scent of the Orient. He drew  inspiration from Japanese prints to fuel his own work.

Van Gogh began to fervently collect Japanese prints after discovering them in 1885,  while in Antwerp. He was drawn to this style of art, at once sparse and vibrant with  color, ornamentation, motifs, figures, and a distinctive approach to volumes. The artist  transposed the principles of these engravings into his own paintings. 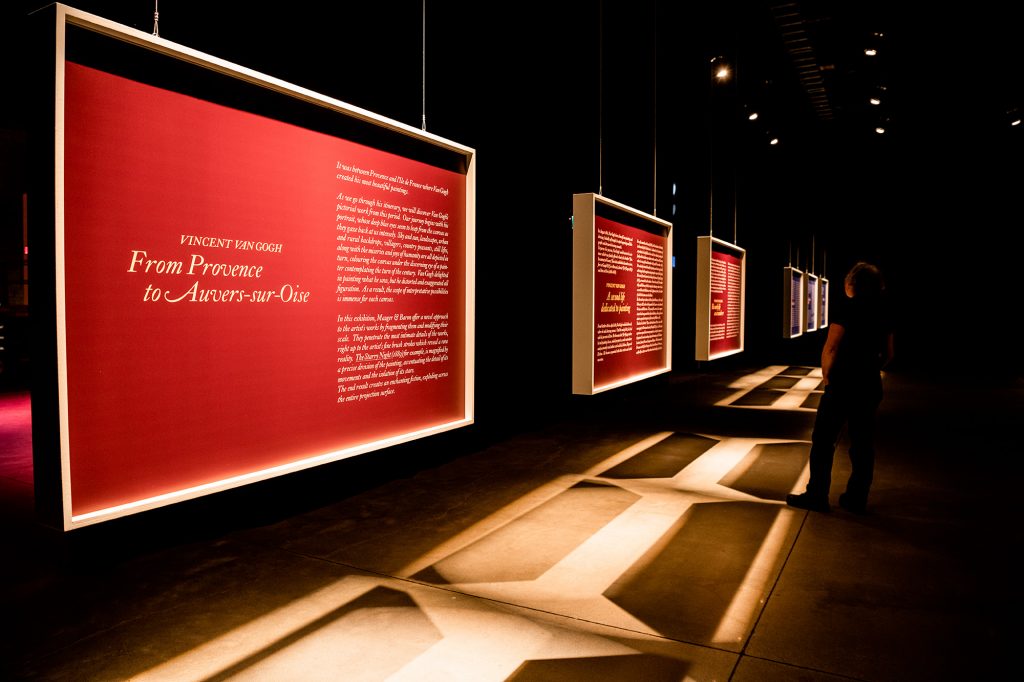 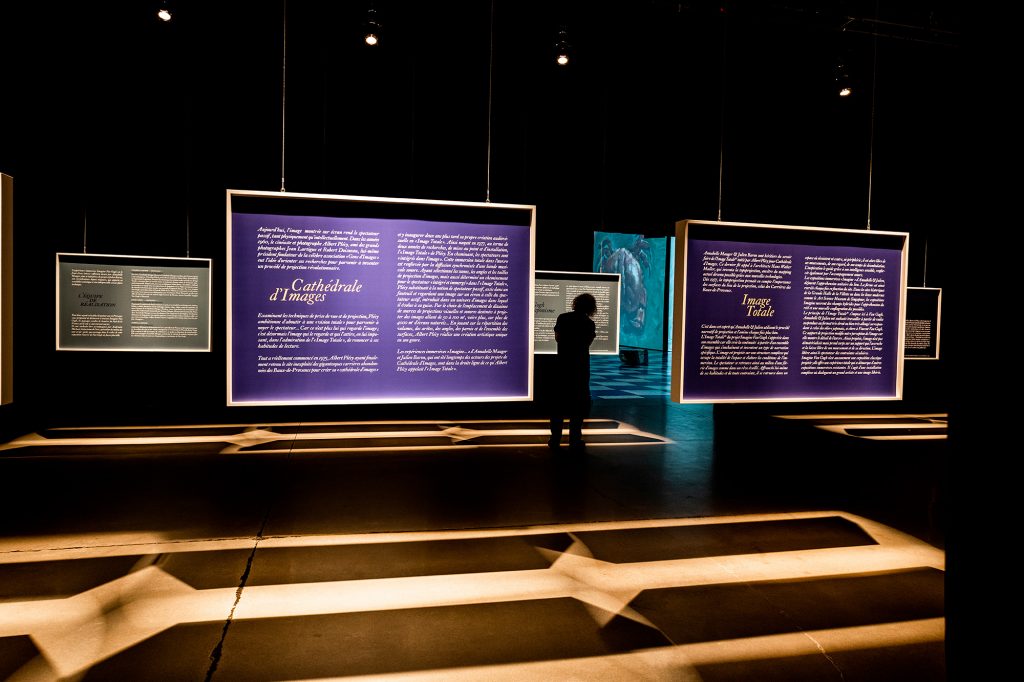 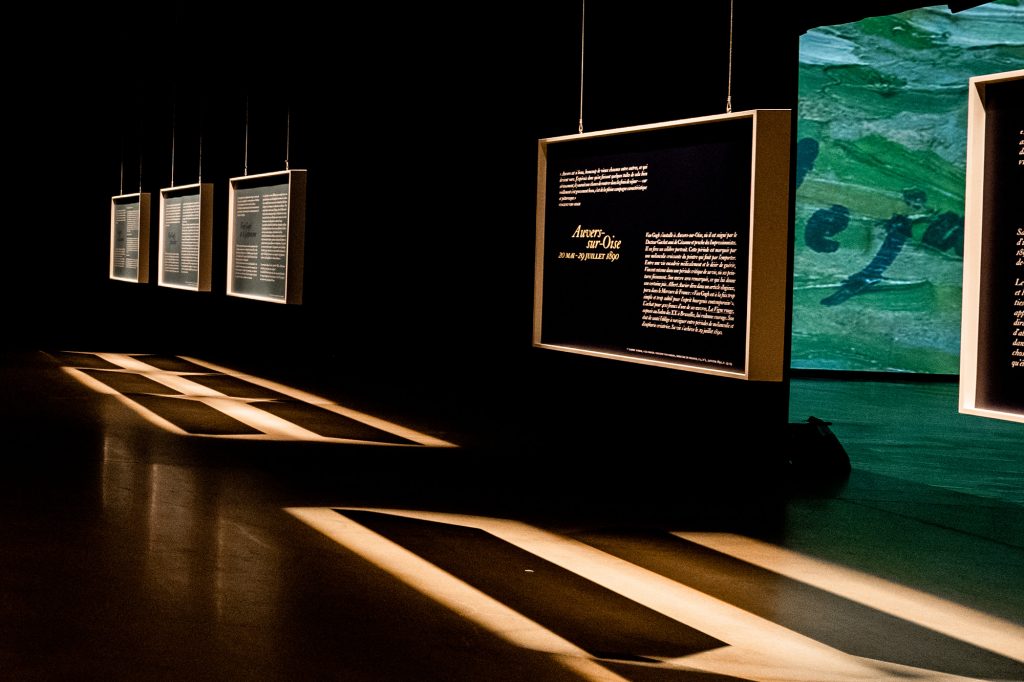 The pedagogical room was conceived by Annabelle Mauger in collaboration with Art Historian Androula Michael. This scientific  partnership turns Imagine Van Gogh into a comprehensive and thorough art exhibition as well as a pedagogical platform towards making Van Gogh’s journey accessible to large audiences. In an innovative display, this section aims to acquaint visitors with Van Gogh’s oeuvre and life while providing background insight on Image Totale©.
The educational gallery prepares visitors for the multi-sensorial celebration of Van Gogh’s major creative years awaiting in the next room. The sequenced journey evokes the artist’s life and his dedication to painting from 1888, when he moved to Provence and where Van Gogh captured nature’s beauty  in the most vibrant palette: residing first in Arles, then in Saint-Rémy-de-Provence, and finally in Auvers-sur-Oise where he died in 1890.